The World Trade Organization (WTO) system is the successor to the General Agreement on Trade and Tariffs of 1947 (GATT 1947) series of trade negotitions or "rounds". Eight such rounds have been completed to date. The central aim of GATT was to open trade across national borders by cutting tarifffs. The GATT system included periodic rounds of negotiations to achieve further cuts in tariffs. The GATT system also included a mechanism for resolving disputes between members. However, the GATT eventually failed to respond to challenges such as the increase in trade in services and nontariff barriers.

The Marrakesh Agreement Establishing the World Trade Organization (Marrakesh or WTO Agreement) is the “final act” of the Uruguay Round of GATT negotiations. It is actually a package of agreements (22 in total): the "umbrella" WTO Agreement and its Annexes, which include GATT 1994  (a separate agreement from the earlier GATT 1947) and a series of Multilateral Trade Agreements (i.e. Agriculture, Antidumping, , Sanitary Measures, Rules of Origin, GATS, TRIPS) and the Understanding on Rules and Procedures Governing the Settlement of Disputes (DSU) (Annex 2) which applies to all of the foregoing Agreements. These Covered Agreements are binding on all WTO members . The plurilateral agreements also annexed to the WTO Agreement are not binding. Members may choose to adhere or not. See International Trade and Economic Relations by Folsum, Gordon & Spanogle at 44-45, K3943 .F64 2009

Per its website, the WTO has 153 nation members as of July 2008, including the U.S. Interestingly, the U.S. enacted legislation to implement the WTO and Covered Agreements (i.e. the Uruguay Round Implementation Act) but never ratified them as a treaty.

The Covered Agreements go beyond GATT and relate not only trade in goods, but also trade in services (GATS) and trade related aspects of intellectual property (TRIPS). Id at 46-7. A navigational guide and overview of the WTO agreements, including the following chart of the basic structure of the Agreements, can be found at the WTO website. 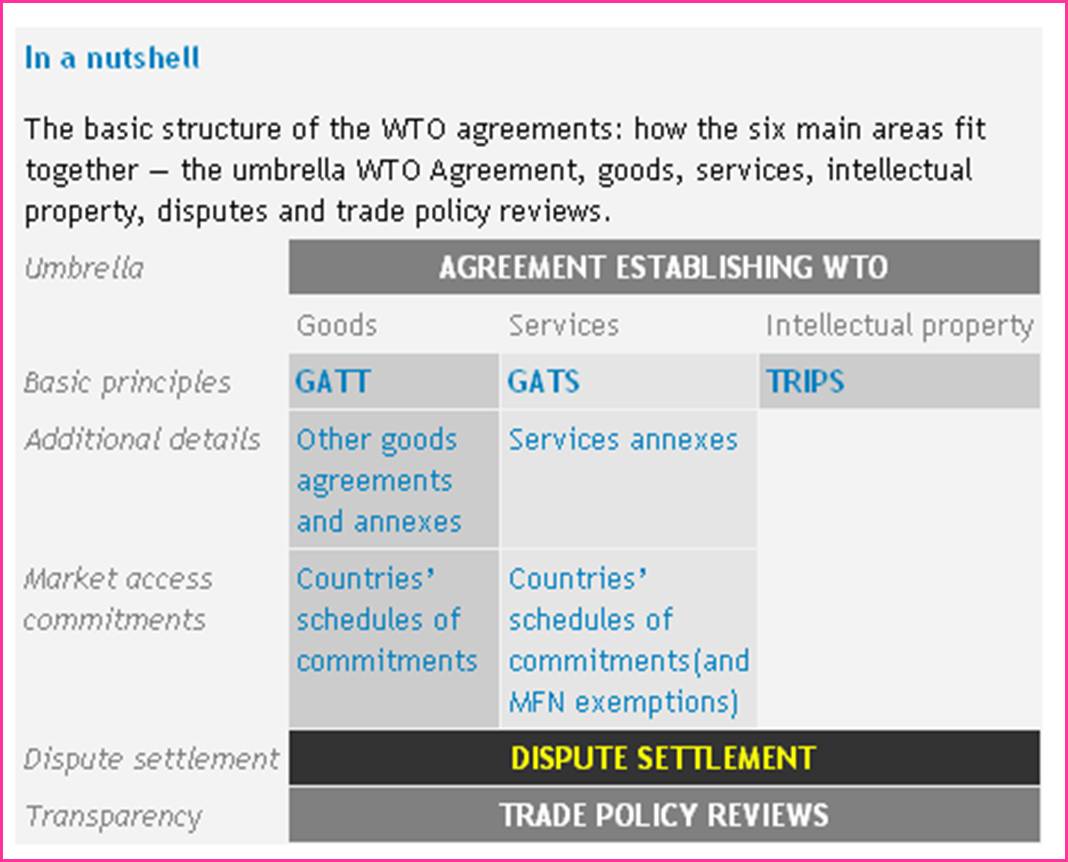 Like other IGOs, the WTO was created by treaty, specifically the Marrakesh Agreement. It is not part of the U.N. but it is a related organization. The WTO is made up of three tiers:

Dispute settlement is one of the most important functions of the WTO. The WTO has a unified system for settling trade disputes under the Understanding on Rules and Procedures Governing the Settlement of Disputes (DSU) and through the Dispute Settlement Body (DSB), which is a special assembly of the General Council and includes all WTO members. The dispute settlement procedure consists of five stages: 1) consultation; 2) panel establishment, investigation and report; 3) appellate review of the panel report; 4) adoption of the panel and appellate decision & 5) implementation of the decision adopted. A panel report adopted by the Dispute Settlement Body (DSB) may be appealed to the Appellate Body (AB). See International Trade and Economic Relations by Folsum, Gordon & Spanogle at 59-68, K3943 .F64 2009

The WTO has an extensive website which provides access to its panel decisions through its website under Trade Topics, Dispute Settlement discussed further below. In addition, the WTO website makes other WTO documentation available under Documents,data and resources and the Documents Online database. Like UN documents, WTO documents are organized by means of document symbols or "nomenclature". The Guide to Documentation provides information as to the meaning of these document symbols. Note that the dispute settlement materials denoted by the symbols WT/DS are likely to be of most interest to legal researchers. 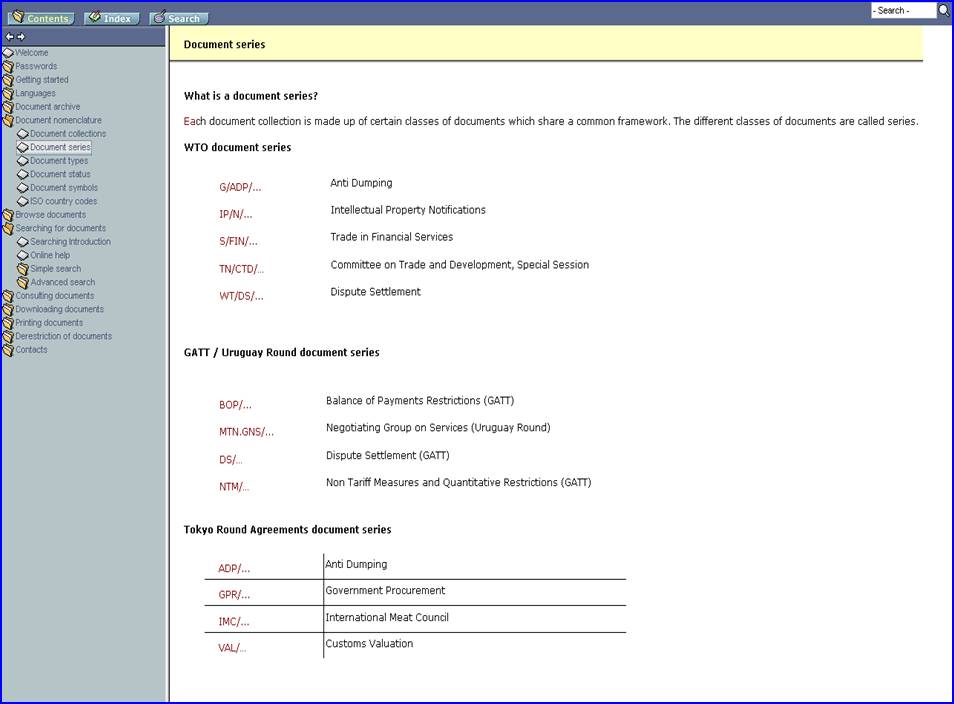 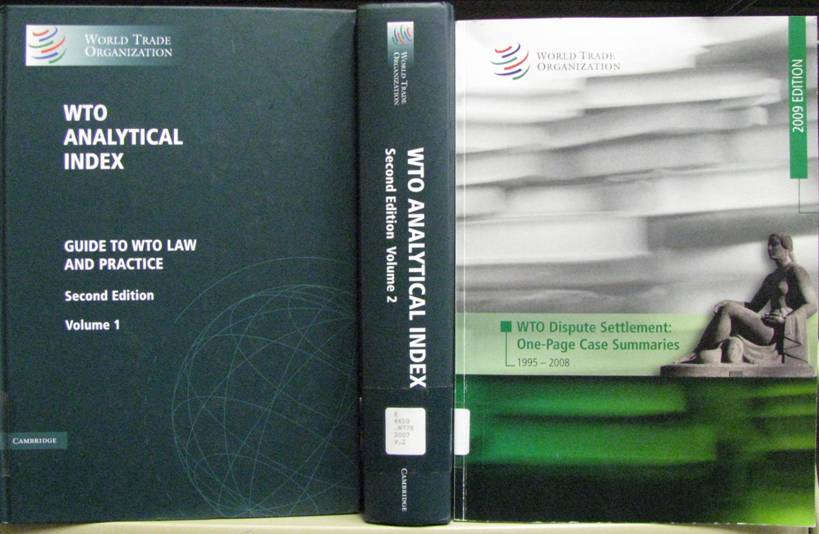 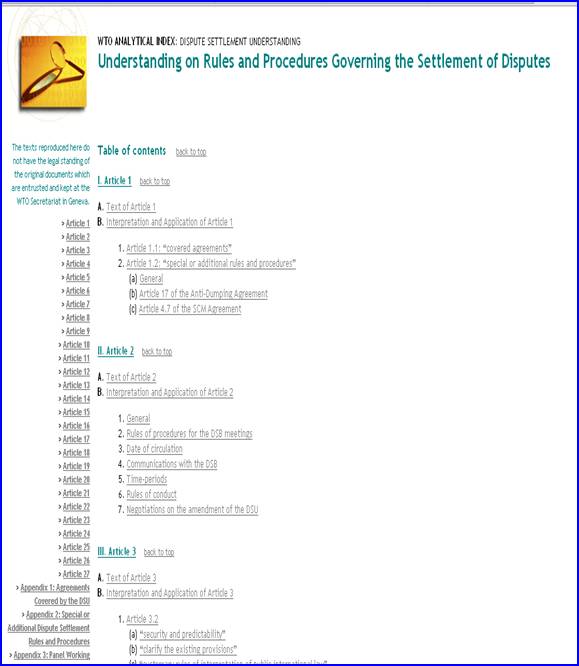 The WTO website also provides a "Find Disputes Cases" feature to search for decisions by agreement, subject or country. 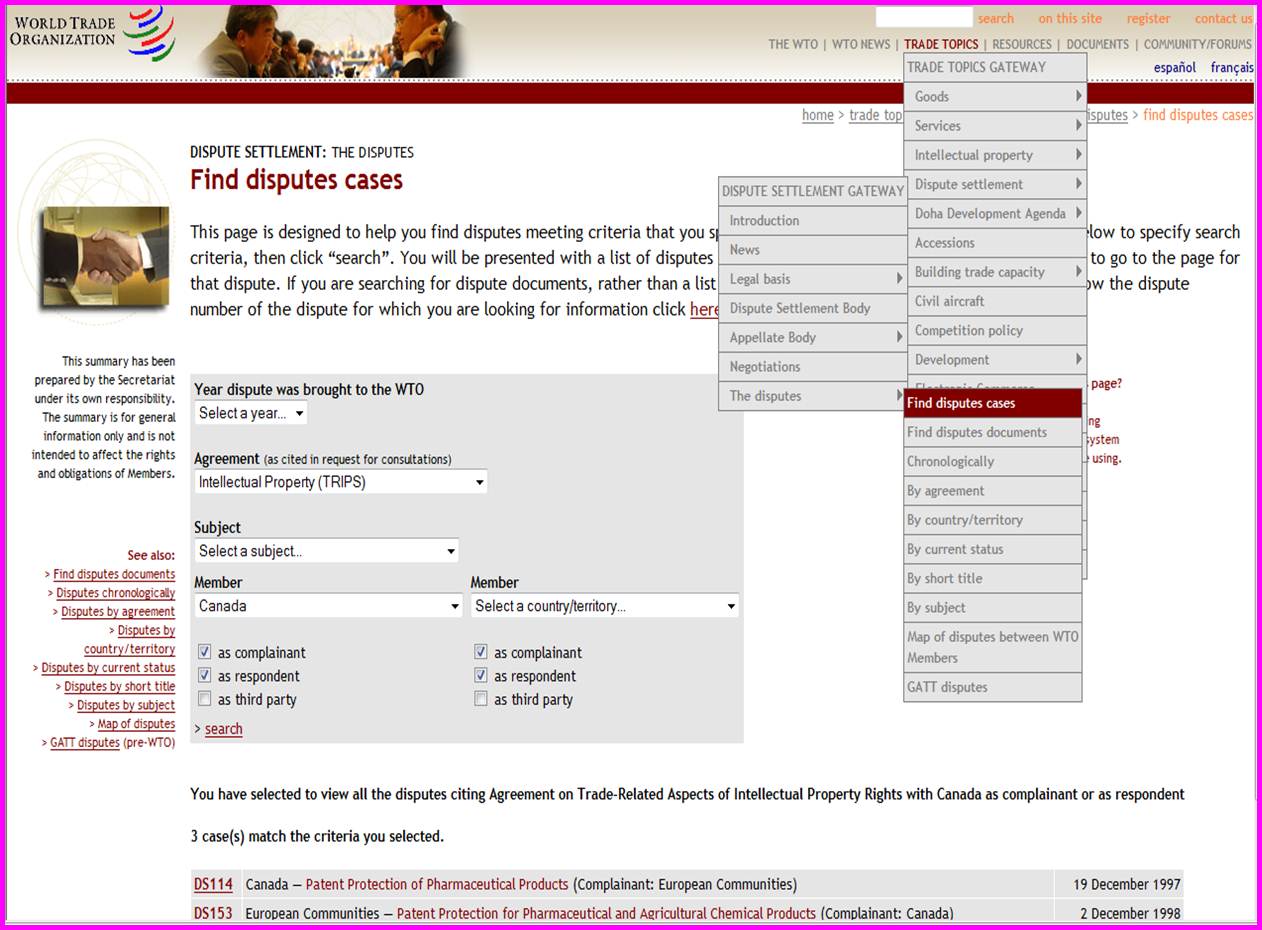 The WTO websites provides access to pdfs of the decisions full text. In addition, one page summaries, like the one below, are available electronically via the WTO website and in print in the Library. See WTO dispute settlement: one-page case summaries, 1995-2020 (Geneva [Switzerland]: The Organization, 2008).  K4610.A7 W673 2021 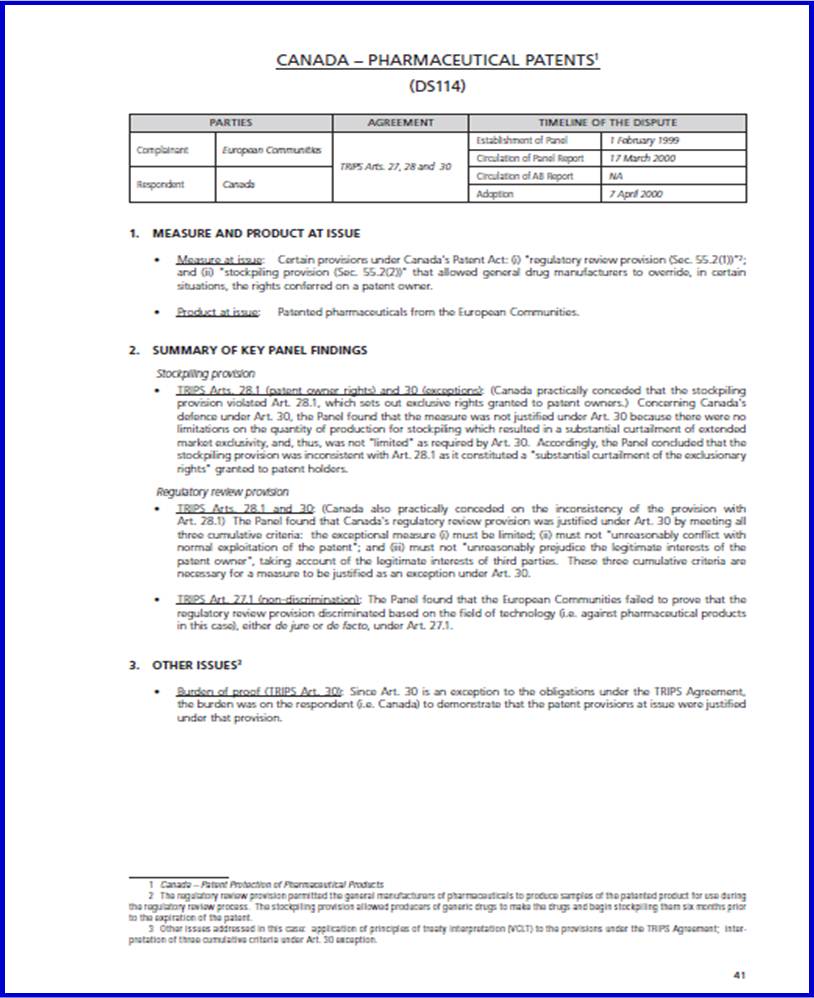 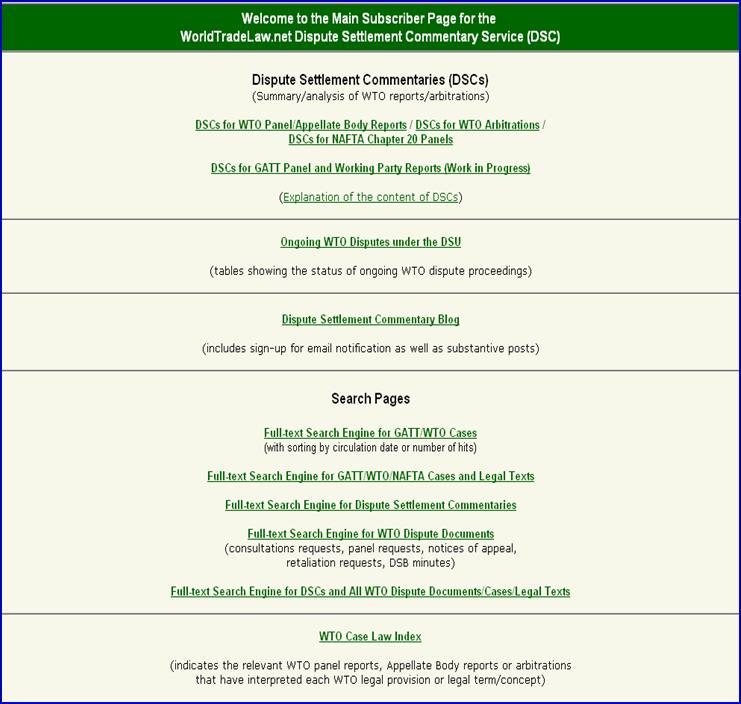 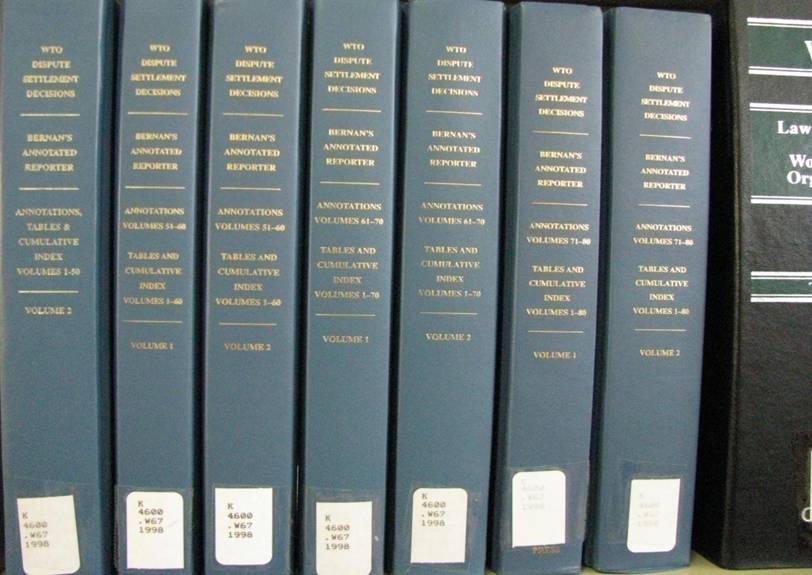