There are generally four kinds of U.N. publications:

The Official Records are the primary documents of the proceedings of the principal UN organs or certain major UN conferences (i.e. United Nations Diplomatic Conference of Plenipotentiaries on the Establishment of an International Criminal Court)at a given session or during a particular year; they are published as a series and always identified as Official Records on the title page; they include meeting records (verbatim or summary), resolutions and reports of major organs, committees and commissions, budget and financial reports and reprints of other important documents. Some documents are published in separately numbered supplements (quarterly) or annexes (sessional) to the Official Records. 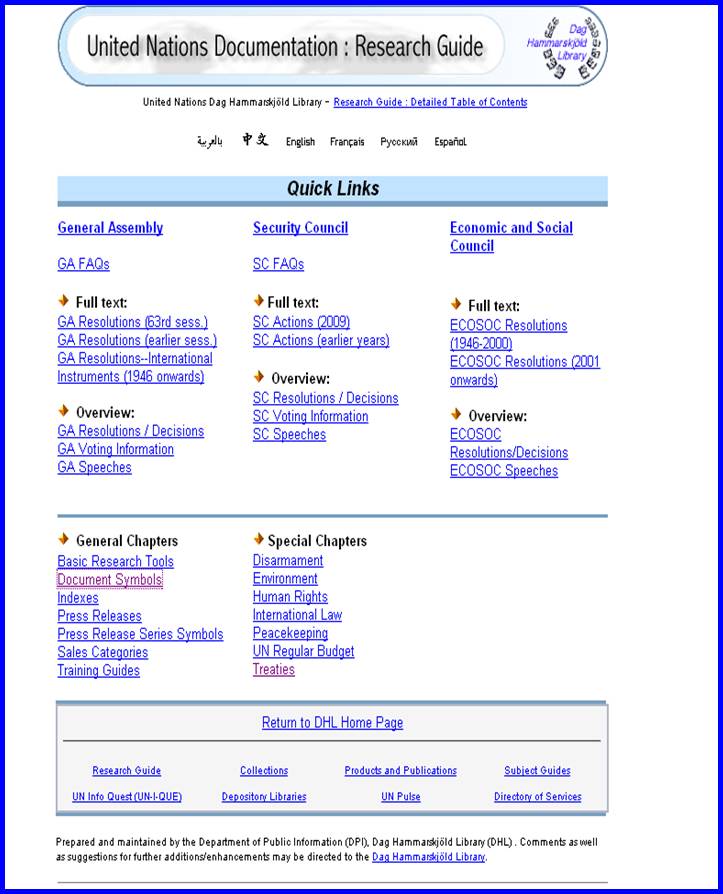 The UN Documentation Research Guide was created by the librarians at the Dag Hammarskjold Library in response to the needs of Library patrons. The Guide provides quick links to GA, Security Council and ECOSOC resolutions. Under Special Chapters, there are links to additional research guides prepared by the U.N. librarians on popular topics, such as Human Rights and International Law. These research guides are excellent shortcuts, as the librarians have already done a lot of the research for you. The Guide also contains an explanation of U.N. document symbols, which is particularly useful to novice researchers. A basic understanding of the symbols will assist you greatly with your U.N. documents research.

Finding the documentation of IGOs like the UN can be a bit challenging, because of the sheer volume of materials and the complex numbering system by which these materials are organized. The document symbols generally stand for the parent body, subsidiary organs and type of document as in the example below.

If you have the document number, it is easy to retrieve the document using ODS or the U.N. Digital Library as discussed under U.N. Resources & Research Tools.