The European human rights system is the oldest and most effective in existence. Buergenthal, Shelton & Stewart, International Human Rights in a Nutshell at 168 K3240.4 .B84 2009. The framework for human rights protection in Europe stems from the Council of Europe (COE), a regional IGO (not to be confused with the European Union). The Council of Europe was created in 1949 by 10 Western European nations under the Treaty of London. To date, it has 47 members (whereas the EU has 27). Although it has more members than the EU, the COE has narrower goals. A key goal is protection of human rights in Europe.

The ECHR has contentious and very limited advisory jurisdiction. The Court's advisory jurisdiction is limited to requests from Committee of Ministers on legal questions concerning interpretation of Convention. It does not include the scope of rights or freedoms under the Convention or any question within the Court’s contentious jurisdiction. The Court's contentious jurisdiction includes both inter-state complaints and private petitions. By ratifying the European Convention, the member State accepts the Court's jurisdiction to receive complaints from other State parties. The right of individual petition to the Court has existed since 1955. A declaration by the State parties accepting the right of private petition was once required, but Protocol 11 made this right automatically available. Individual petitions are subject to the requirement of exhaustion of domestic remedies and the six month rule which requires filing of the petition within six months of the from the date of the final decision of the domestic court and other admissability requirements described under Article 35 of the European Convention. Id at 176-195. The case processing flow chart at the ECHR website is of great help in understanding the petition process.

In a number of States, the Convention has the status of domestic law. It can be invoked as law in the national courts and create rights directly enforceable by individuals. In other States, implementing legislation may be required unless national law already protects comparable rights.

The ECHR is essentially the constitutional court for civil and political rights of Europe. Per its website, the Court has delivered more than 10,000 judgments over the past 50 years and it receives over 30,000 applications every year. It has interpreted most of the rights guaranteed by the Convention. See International Human Rights in a Nutshell at 204-5.

Reforms have been made to help the Court deal with its ever increasing case load, specifically Protocols 14 and 14bis. With the ratification of Russia, Protocol 14 has just come into force this year. Protocol 14 provides for the creation of a judicial filtering body separate from the Court to hear all admissability issues and repetitious cases and the extension of the Court's advisory jurisdiction over requests submitted by national courts.

ECHR opinions are important to U.S. lawyers for at least three reasons. First, the ECHR has referred to U.S. Supreme Court decisions in its opinions. Also, the decisions of the ECHR interpret the European Convention and are often important when interpreting a similar U.N. treaty, the ICCPR. The U.S. became a party to the ICCPR in 1992. Lastly, the ECHR is the most important and effective international human rights court.

ECHR decisions are available at the Court's website in its HUDOC database.

The Organization of American States (OAS) is a regional inter-governmental organization and includes all sovereign nations of the Americas. The branch of the OAS which deals with human rights is commonly referred to as the Inter-American Human Rights System. The Inter-American system is based on the following primary legal sources:

The Commission was initially established in 1959 as an autonomous entity of the OAS. It became a formal organ of the OAS in 1970. It is both a Charter and Convention body. As such, it has roles under both instruments. Under the Charter, it has a promotional and consultative role. It conducts on site investigations and produces country studies.

The Inter-American Court has jurisdiction to handle contentious cases and to render advisory opinions. Ratification of the Convention alone does not give the Court jurisdiction unless a State has made a special declaration or agreement pursuant to Article 62 of the Convention. A case can be referred to the Court only after applicable Commission proceedings have been completed. Individuals do not have the right to refer a case to the Court but can participate once a case has been referred to the Court. Id at 295-7. Decisions of the Inter-American Court can be found at its website and also at the University of Minnesota's Human Rights Library in Spanish.

As compared to the European and Inter-American systems, the African system is relatively newer and less developed. The African human rights system starts with the adoption of the African Charter on Human and Peoples’ Rights, June 27, 1981, 1520 U.N.T.S. 217, 245; 21 I.L.M. 58,59 (1982) (also known as the Banjul Charter). The Banjul Charter was designed to function within the existing fraemwork of the Organization of African Unity (OAU), a regional IGO established in 1963 and since replaced by the African Union (AU) in 2002.

An interesting distinction between the Banjul Charter and its European and Inter-American counterparts is the inclusion of duties as well as human rights. In addition, the Charter is unique in its inclusion of peoples' rights as distinguished from individual rights. Examples of peoples' rights include the rights to self determination and sovereignty and the rights to development, peace and security. Id. at 330 & 335.

The African Commission of Human and Peoples' Rights, created under the Charter and inaugerated in 1987, is the principal  mechanism for protection of human rights in the region. A series of Protocols to the Charter established the African Court of Justice and Human Rights in 2008. The Court is still under development and does not yet have a website. Further information about the Court can be found at the website of NGO Coalition for an Effective African Court on Human and Peoples Rights (CEAC).

The African Human Rights Law Reports (AHRLR) is one of the best sources for finding the jurisprudence of the African Commission of Human Rights and UN treaty bodies relating to African countries. The AHRLR is available online via the Centre for Human Rights at the University of Pretoria website. 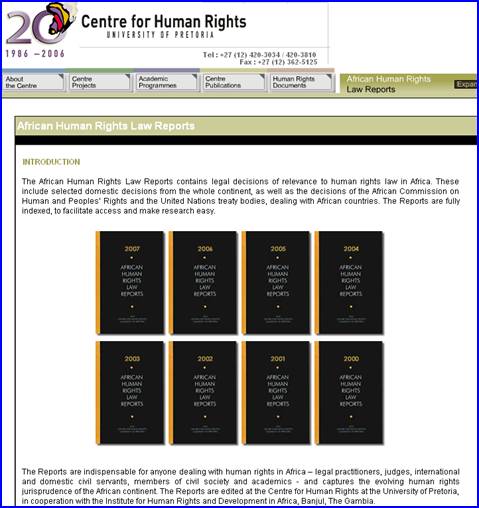 The African Human Rights Caselaw Analyser is an excellent tool for finding human rights cases from courts throughout Africa. 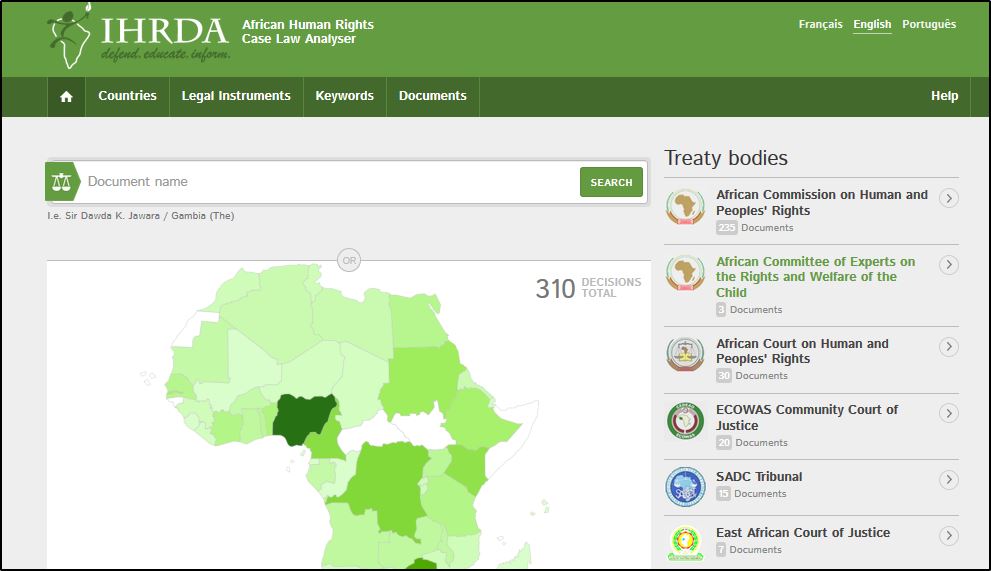