Organization of the European Union

The Commission is the closest to the executive branch.There are 27 Commissioners, one from each member state. Commissioners are supposed to represent the region as a whole, not their home nations. Each Commissioner oversees a Directorate General or Department within the Commission. The DGs correspond to the main areas of the treaties i.e. agriculture, competition, transport, energy. The EU Commission researches and proposes legislation which then goes to the Council for passage or modification. It also enforces EU legislation; it serves as the EU tribunal in competition/antitrust matters. The Commission has a pivotal role in the law making process as only it can draft legislative proposals. For further explanation as to the Commission's role in the lawmaking process, see the explanation at the EU Commission website.

Council of the EU--principal legislative; regulations, directives, decisions (not to be confused with the Council of Europe)

The Council is the principal legislative branch with final legislative authority (somewhat similar to our Senate). However, it can’t act independently but can only respond to the Commission’s proposals. It passes but does not initiate legislation. It is composed of permanent representatives (ministers) and staffs of the member states. Like the Commission, there are 27 Council members. However, the Council members represent the interests of their home nations. Council members change depending upon the topic under discussion, but there is a Committee of Permanent Representatives (COREPER) which assists the Council. There is a higher level European Council made up of the heads of state of the member nations. The European Council holds summits twice a year to formulate policy guidelines and initiatives. While the European Council consults with the Commission and the Parliament, it is not subject to the procedures set forth in the EC Treaty and may operate outside the Treaty.

Parliament is made up of members directly elected within their own nations (like our House of Representatives). Parliament is quasi-legislative but relatively powerless. It can neither initiate or pass legislation, which has lead some to question just how democratic the EU is! Parliament has a right to question Council and Commission and be consulted. Its consultative role has been strengthened in recent years by treaties, including the Amsterdam Treaty. Now Parliament is more involved in law making through the codecision process. Parliament can delay passage and, in effect, veto legislation. Parliament can censure the Commission and it can sue the Council or Commission for failure to act.

The EU system is based on a civil law system of legislative codes. However, the decisions of the EU Court of Justice are now an important collateral source of law. The ECJ’s jurisdiction is constitutional in nature. The ECJ interprets EU law and the laws of the member states when requested by issuing “preliminary rulings”. The Court of First Instance came into existence in 1988 and is the trial court equivalent. It takes cases referred to it by national courts.  The courts are composed of 27 judges and 9 advocates-general. Proceedings are governed by the Statute of the Court of Justice and Court’s Rules of Procedure. They are non adversarial but loser bears costs. The advocate-general acts as a permanent “friend of the court” and may issue opinions that are more informative than those of the court itself. There are no dissenting opinions. 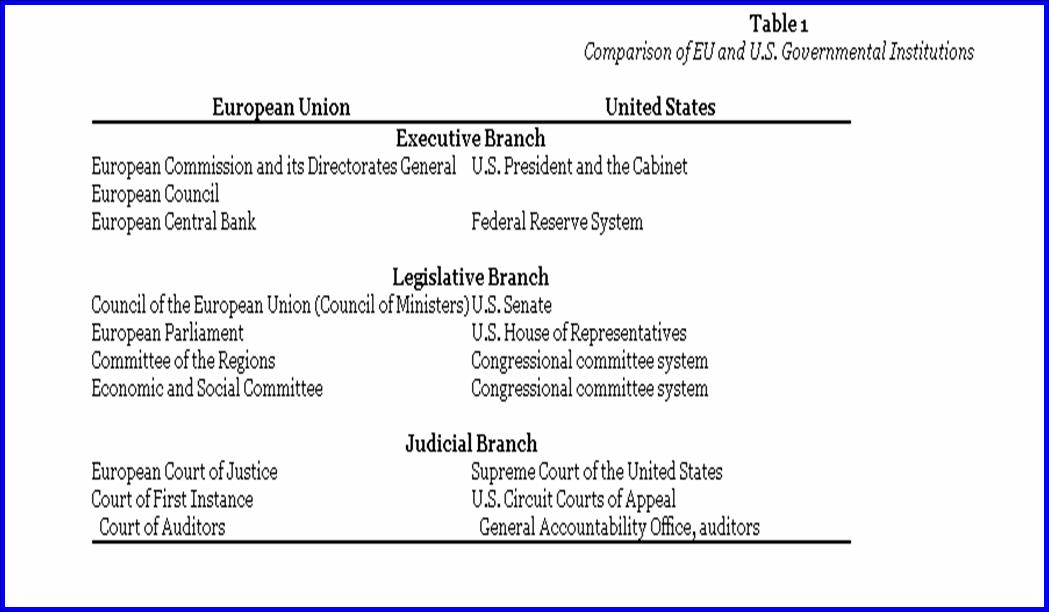