The U.N. human rights system remains the central framework for human rights protection throughout the world. As illustrated in the U.N. Documentation Research Guide, there are many organs within the U.N. that are charged with human rights related duties. 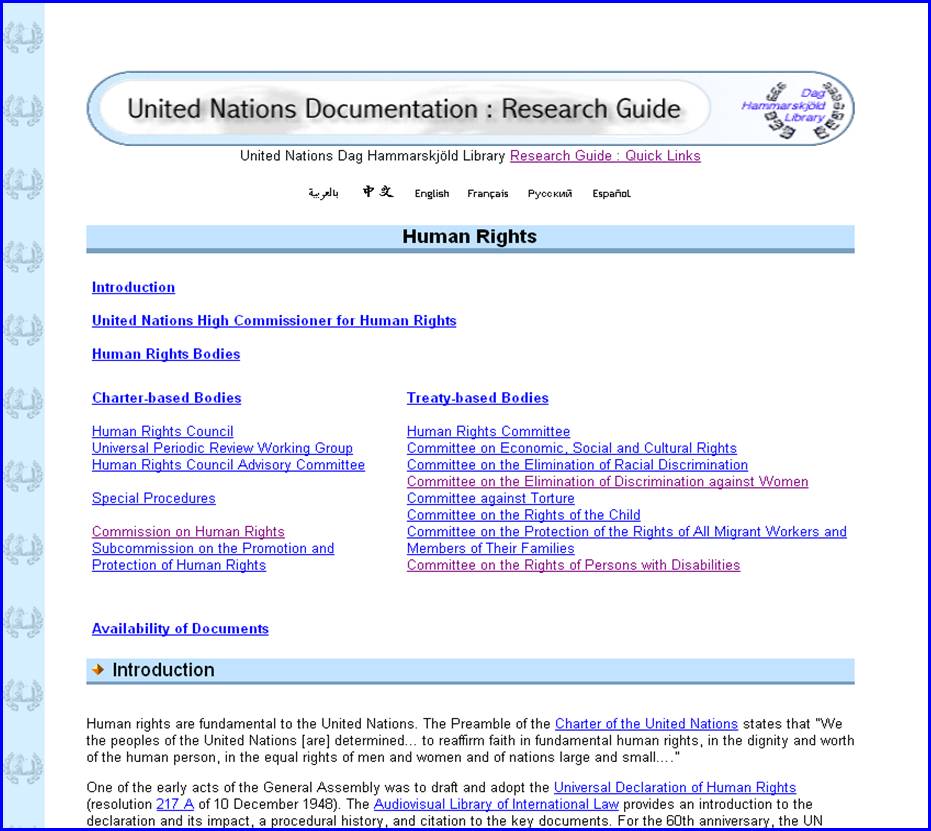 In addition, there are eight human rights treaty bodies that monitor implementation of the core international human rights treaties. These bodies and the abbreviations of the treaties under which they were established, are listed below:

The OHCHR provides secretariat support for all U.N. human rights bodies. In addition, the OHCHR website supports the following research tools and databases:

Thus, the OHCHR website should be among the first places to begin research for U.N.  human rights documents and information. 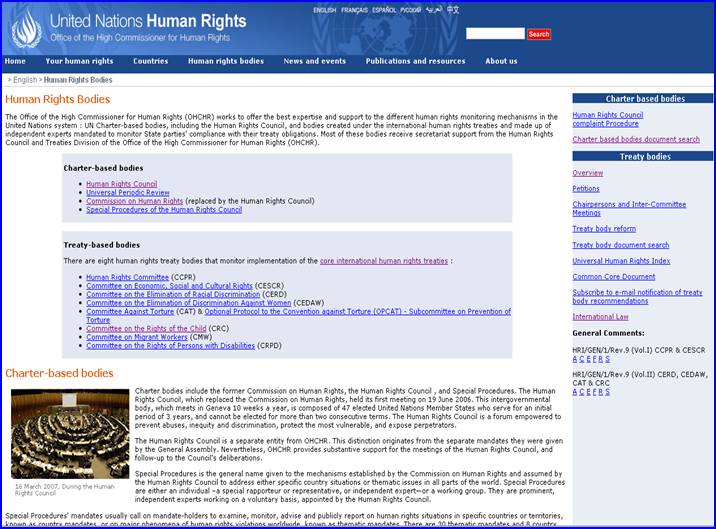 The Human Rights Committee (HRC) is one of the most important U.N. treaty bodies as it was established under one of the most important U.N. human rights treaties, the International Covenant for Civil and Political Rights (ICCPR). To date, 166 nations are parties to the ICCPR, including the United States albeit with significant reservations, declarations and understandings (RDUs). The HRC has jurisdiction to receive inter-state communications (complaints by one state against another) if state parties have made declarations recognizing the HRC’s jurisdiction pursuant to Article 41(2) of the ICCPR.

The inter-state complaint system available under ICCPR, Art. 41(2) is essentially formal conciliation. It does not provide for adjudication or quasi-adjudication and is relatively weak. Alternatively, state parties could resort to the International Court of Justice if they have accepted the ICJ's jurisdiction. See discussion of Court Decisions. In contrast, the individual petition system resembles a quasi-judicial proceeding. Victims may file a complaint with the HRC, provided that they have exhausted all available domestic remedies. As a result of its adjudication of these communications, the HRC has developed a significant body of case law interpreting the ICCPR and First Optional Protocol. This case law is considered an important part of modern human rights law. See Buergenthal, Shelton & Stewart, International Human Rights in a Nutshell at p. 61-7.

The principal function of the HRC is its administration of the reporting requirements under the ICCPR, Article 40(1). This reporting function is the central mechanism by which the HRC fulfills its mandate to monitor compliance with ICCPR treaty obligations. The HRC does have the express power to verify state reports by undertaking its own investigations. However, it can draw upon its member's own expertise and on information provided by other U.N. bodies and even NGOs. Id at 54

The HRC has developed comprehensive reporting guidelines and procedures over the years. When a country report is submitted, a country rapporteur and Country Report Task Force study it. The rapporteur drafts a list of issues for discussion with the Task Force. The Task Force generates questions based on this lists. The reporting state has time to review the questions and answer them. The HRC examines the report and answers in public session. Following the oral presentation of State representatives, members may ask additional questions and comment.

Another quasi-judicial source of human rights law are the HRC's General Comments, which are addressed to the state parties as a whole and are designed to provide guidance to them in complying with their obligations under the ICCPR. These General Comments spell out the HRC's interpretation of ICCPR provisions. Id at 59.

As mentioned earlier, international human rights law is treaty based. Locating the necessary instruments is usually the first place to research. A good strategy is to begin with the IGO that promulgated the instrument. The websites of the organs described above are useful starting points for U.N. human rights treaty research.

In addition, the research tool Multilateral Treaties Deposited with the Secretary General (MTDSG) (discussed earlier under Treaties) conveniently groups such treaties in Chapter IV. By clicking on the links provided, one can retrieve status and other treaty information. 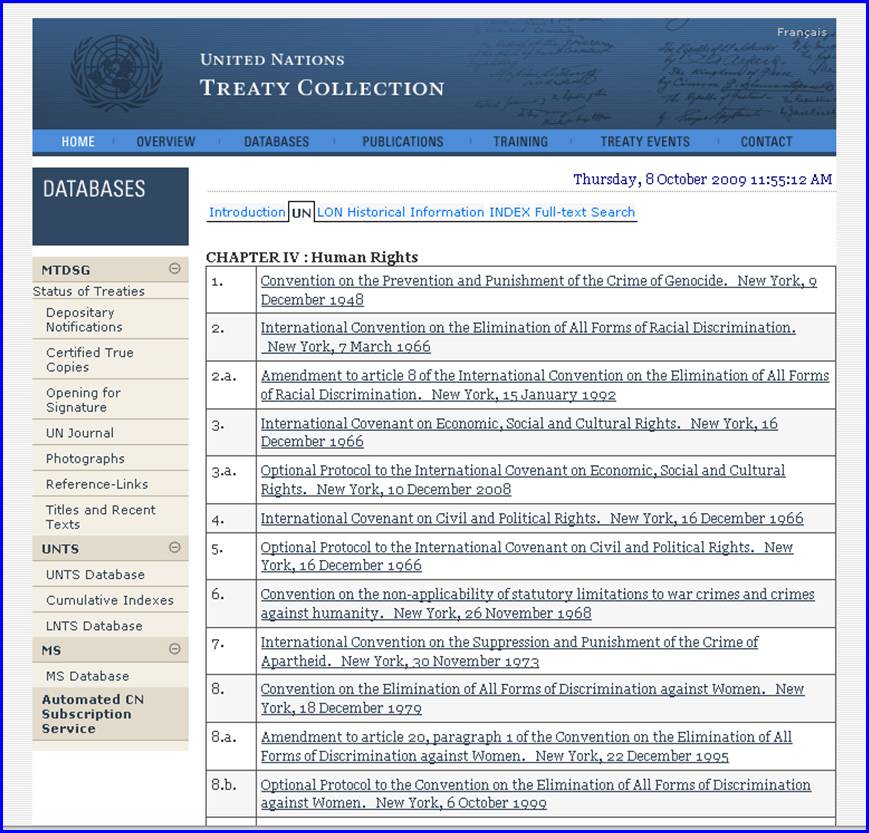 The Universal Human Rights Index is a relatively new research tool designed to facilitate access to the documentation of all human rights bodies within the U.N. system. Unlike other U.N. document research tools such as United Nations Digital Library and ODS discussed earlier under U.N. Resources and Research Tools, this tool is limited to U.N. human rights documentation. 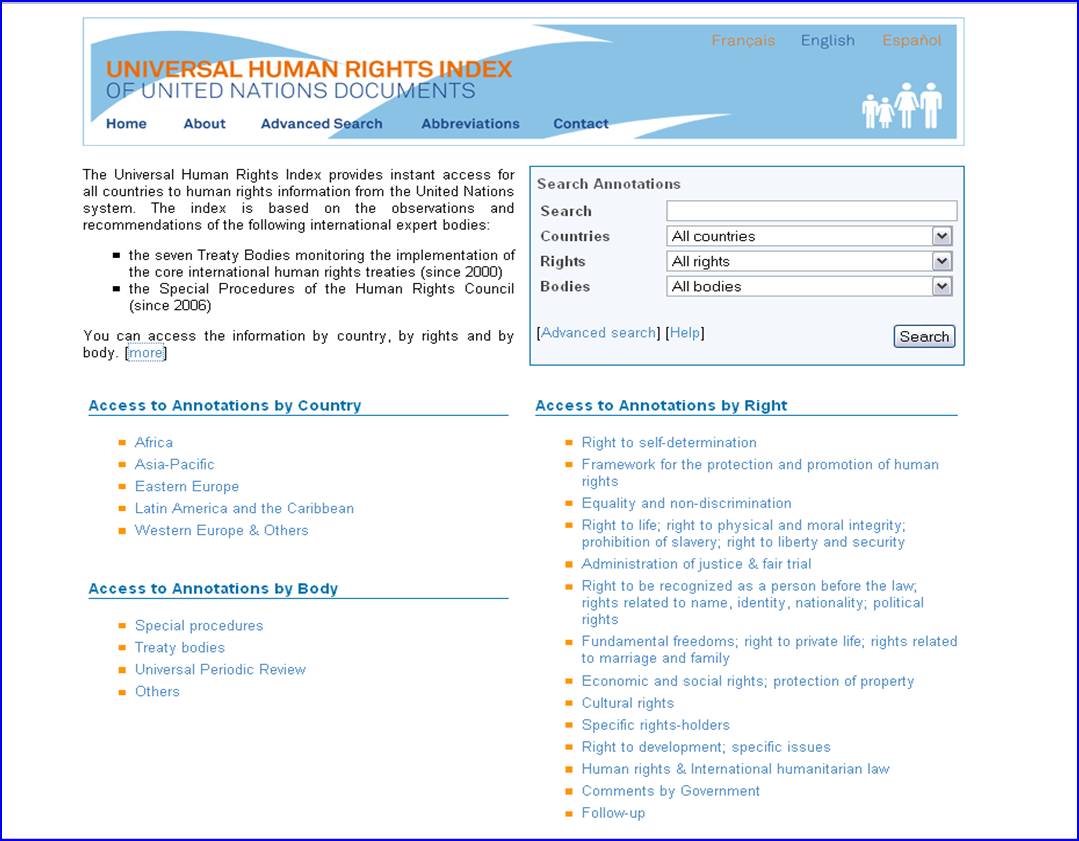 The Index provides access to the observations and recommendations of the eight human rights treaty bodies, which monitor the implementation of the core international human rights treaties and their protocols listed above. In addition, the Index covers reports made through the Universal Periodic Review process and reports of the Special Rapporteurs and Independent Experts under the Council's Special Procedures.

The comments by governments on the Concluding Observations of the treaty bodies can also be found in the database. It is possible to search by country, type of right or topic involved (i.e. right to education) or specific human rights body (special rapporteur on the right to education). The list of abbreviations provided is indispensable.