In addition to locating the text of a treaty, the researcher will want to know which countries are parties to the treaty and whether the treaty is in force. It is possible for a country to sign a treaty, for example, but not ratify it. Absent ratification, such country has not signified its intent to be bound by the treaty. A country may be a party to a treaty but with reservations that may alter its obligations under the treaty. A treaty may have been concluded but may not yet have come into force. An older treaty may no longer be in force. Thus, updating treaty status is a crucial part of treaty research.

Treaties in Force (TIF) (KZ235 .T74, 7th floor) is an annual publication of the U.S. State Department, listing U.S. treaties that are in force as of January 1 of that year.  Part I lists bilateral treaties, arranged by country and subdivided by topic; Part II lists multilateral treaties, arranged by subject. TIF is also available at the State Department Website. In addition to the indexes discussed under Publication of U.S. Treaties, Kavass & Sprudzs created a companion publication to TIF entitled A Guide to the United States Treaties in Force (KZ235 .G85). The Kavass Guide provides a more finding tools than TIF including, lists of treaties in numerical, chronological, subject and country order. It also provides references to KAV Agreement numbers. The material in this series is designed to supplement and make more accessible the information found in TIF. Both TIF and Guide to TIF are digitally archived at the Hein Online Treaties and Agreements Library. 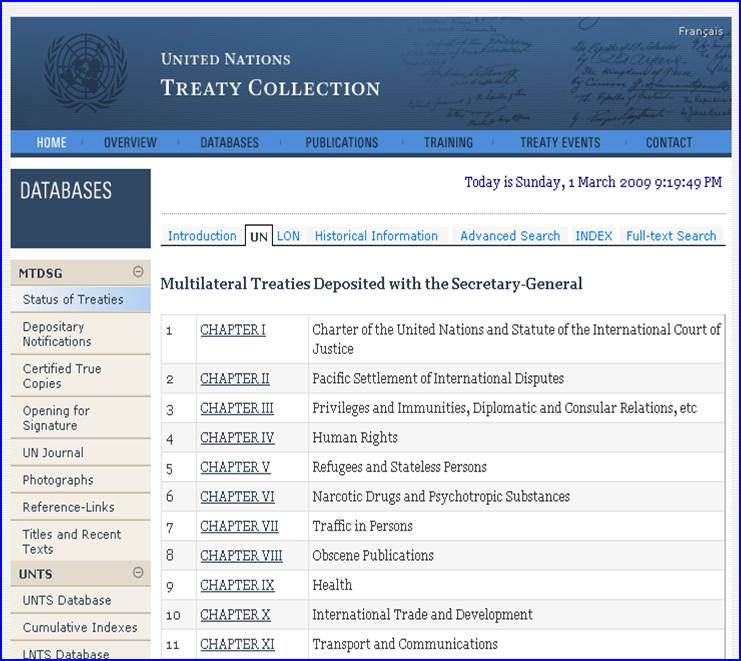 HeinOnline's United Nations Law collection provides a seamless link from treaty text to treaty status, but means of its "treaty summaries".The links to current status information are provided at the end of the treaty summary. 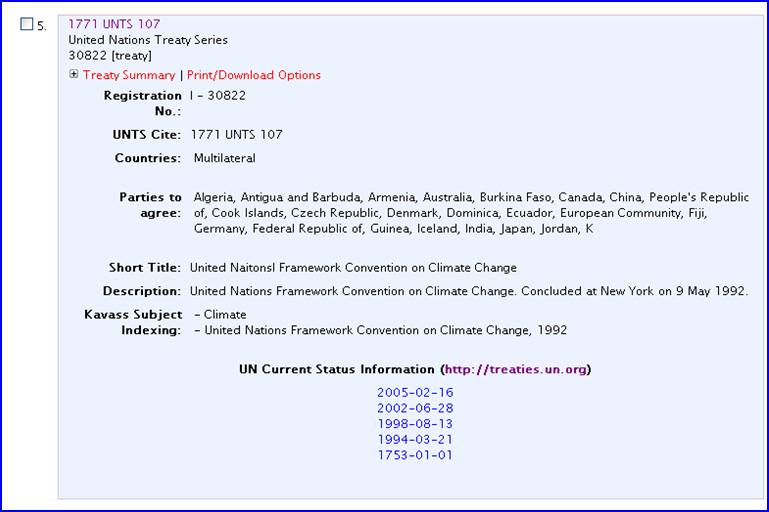 Note that the status information provided via HeinOnline is derived from the United Nations Treaty Collection. The links shown above, for example, lead to later treaties amending the Climate Change Convention, including country parties to these amendments. However, this status information is not as complete as that provided via the UN website, specifically, MTDSG. Only MTDSG provides access not only to the country parties but also to the full text of any reservations, declarations and understandings made by such parties as explained further below.

Treaties are curious creatures in that nations can agree to some provisions and opt out of others. A nation which opts out of a particular treaty provision is making a reservation. Nations can also issue declarations or understandings when signing a treaty, but only a reservation actually changes the legal effect of the treaty with respect to that country. Such "RDU"s, as they are called, can be difficult to locate. Only the MTDSG, in particular, the electronic version of the MTDSG at at the U.N. Treaty Collection website, reproduces the full text of RDUs for all U.N. treaties. 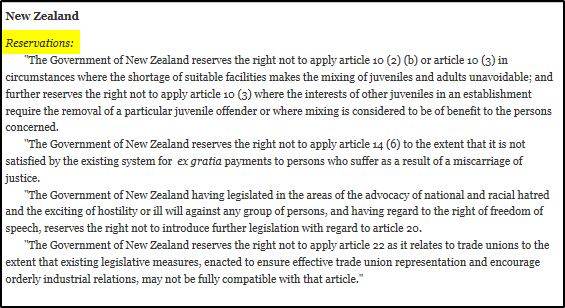