International environmental law (IEL) is part of public international law. Like other areas of public international law, IEL is largely treaty based. Given the ever changing nature of scientific information, IEL treaties tend to follow a general framework format with detailed protocols specifying the implementation of the treaties and annexes containing rapidly changing, complex technical information. It is critical to examine these protocols and annexes carefully in order to determine what actions are prohibited or required.

Certain features of IEL distinguish it from traditional public international law. One such feature is the impact of national environmental laws and policies on the growth of IEL. In addition, biophysical forces have shaped the development of IEL more so than geopolitcal forces. IEL's relatively non-political subject matter and the influence of domestic law on IEL make it a special area within international law. Guruswamy, Lakshman. International Environmental in a Nutshell (Thomson West, 2007) at p. 1-2. K3585 .G87 2007

Of all the international law sources, treaties provide the best way to address the peculiar nature of environmental problems. These problems range over a wide spectrum of factual situations and require continuous observation and monitoring and quick legal action in response to changes in scientific information. Custom develops slowly over time and typically addresses one issue at a time. Furthermore, custom provides no mechanism for inducing compliance or addressing infractions. Treaties, in contrast, allow for targeted laws, flexibility, compliance and dispute resolution mechanisms. A drawback of treaties, however, is the demanding procedure for treaty amendment, which typically requires ratification by all treaty parties. These amendment restrictions prevent exisiting treaty regimes from keeping up with new developments and technologies or scientific findings. The three tiered IEL treaty format, mentioned earlier, including a framework treaty, amending or implementing protocols and technical annexes addresses this deficiency. Guruswamy, Lakshman. IEL Nutshell at p. 5-8.

Even so, many of the principles set forth in IEL treaties, like other areas of public international law, are vague, nebulous, aspirational or hortatory making them difficult to apply and enforce. The interpretation of such treaty language, including who is empowered to interpret treaties and how, is, therefore, an important aspect of IEL. IEL Nutshell at p. 11-12. There has been a trend in IEL towards non-binding agreements or "soft law" as exemplified by Agenda 21, the Rio Declaration and the goals set forth in the Millenium Declaration (Millennium Declaration Goals or MDGs). Id. at p. 47, 50.

While treaties are preeminent, custom also plays a role in IEL. The most established customary IEL obligation is the prohibition against transboundary harm which is premised on the broader principle of "sic utere tuo ut alienum non laedus" (use your property in such a way as not to injure that of another). Many other principles have been espoused in treaties, conference declarations, G.A. resolutions and other IGO documents,  but have not yet attained the status of customary IEL. Such principles include the polluter pays principle, the preventive and precautionary principles and principles of good neighborliness and cooperation.The restatement of customary IEL as principles rather than as rules means that they may guide action but do not mandate obligations or specific results. The principle of sustainable development lies at the foundation of modern IEL. Given the foundational character sustainable development, common but differentiated responsibility (CBDR) may now be customary law. IEL Nutshell at p. 18-20, 654.

The absence of institutions equivalent to those in nation states does not necessarily render a void in IEL but makes IGOs particularly important. Despite the growth of IEL, there is still no single organization charged with protecting the environment akin to the WTO and its protection of free trade. IEL organizations are fractured and divided along functional and geopolitical lines. A number of UN Specialized Agencies, such as FAO, WHO, IMO, ILO and UNESCO have an environmental role. Of the UN organizations, UNEP is perhaps the most important. UNEP is a UN program, created by General Assembly resolution, not by treaty. UNEP acts as a focal point for environmental action and coordination but has no executive power. Its activities are financed directly by member states. As a result, its mission is to convince the states of the need for environmental action, provide expertise and advice and sponsor treaties. IEL Nutshell at p. 59-62.

Beginning with the 1972 Stockholm Conference, major international conferences have played a pivotal role in the development of IEL and spawned a large number of IEL treaties. IEL Nutshell at p. 54. Key conferences and the treaties or other actions that resulted include the following:

1972 Stockholm Convention on the Human Environment

United Nations Convention on the Law of the Sea (UNCLOS) 1982

An excellent electronic research guide on IEL is available via Globalex. A chart of IEL treaties on specific IEL subtopics is provided as well as a comprehensive list of IGOs and NGOs and their websites. 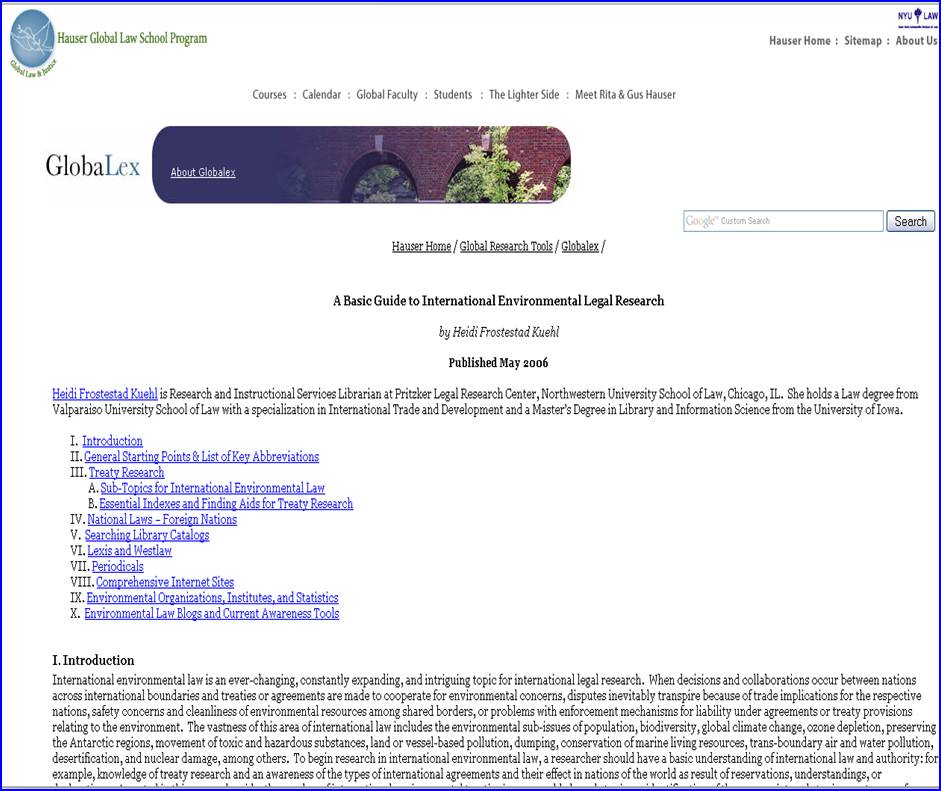 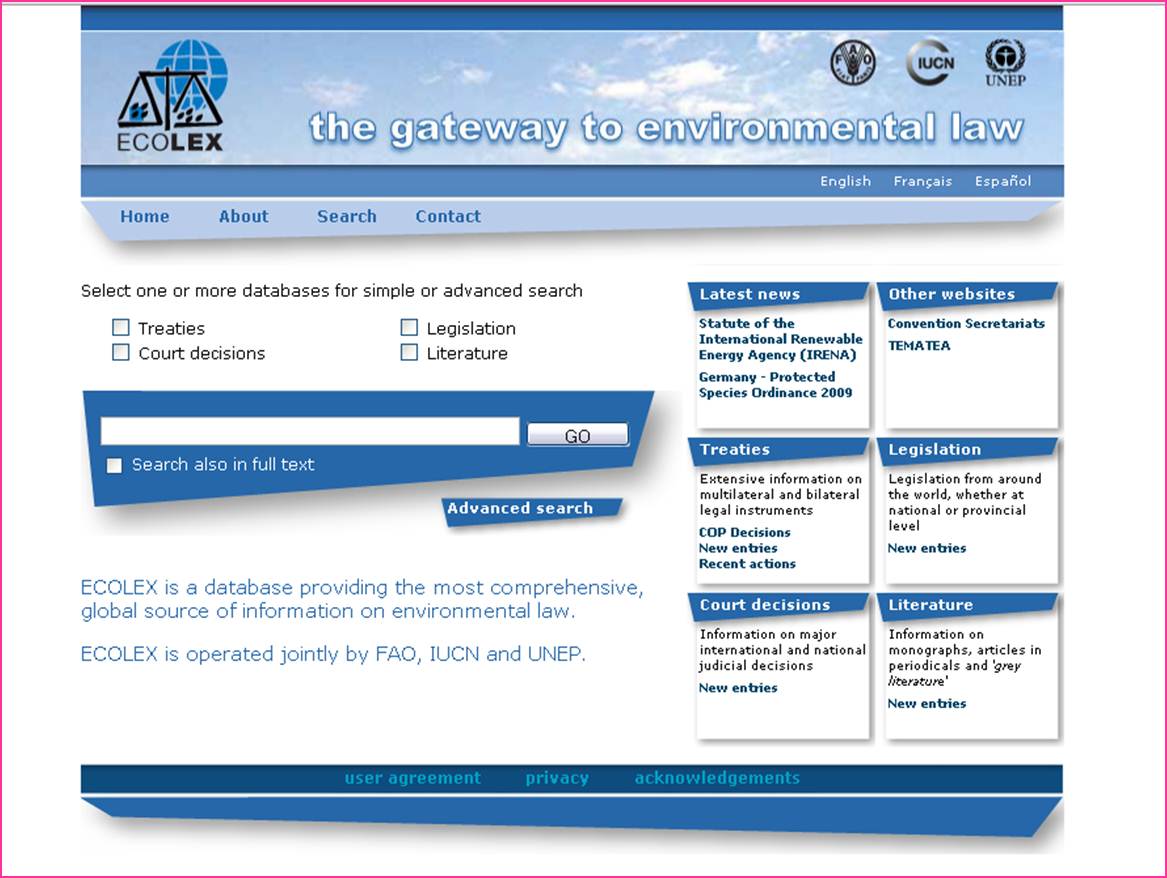