Effect of Treaties in Domestic Law

The implementation of treaties in domestic law is a complex topic particularly in the United States. Countries tend to fall into one of two categories: monist or dualist. In a monist jurisdiction, there is no distinction between international law and national law in the domestic legal sphere. A treaty, for example, is immediately effective in such a jurisdiction. In contrast, in a dualist jurisdiction, international law and national law are seen as separate realms and a treaty is not effective until enacted into domestic law. The U.S. system is a hybrid of these two views. While treaties are "the supreme law of the land", it may be necessary to enact implementing legislation in order to give the treaty effect domestically at least in the case of so called "non self executing treaties". Self executing treaties, however, are effective domestically without the need for implementing legislation. See Aust, Anthony. Modern treaty law and practice (Cambridge University Press, 2007). KZ1301 .A93 2007

Confusion as to the legal effect of treaties in the U.S. has come to the fore with respect to Art. 36, Vienna Convention on Consular Relations, Apr. 24, 1963, 21 U.S.T. 77, 596 U.N.T.S. 261. Art. 36 requires that foreign nationals who are arrested for crimes in the U.S. be notified that they have the right to contact their country's consular office. In several death penalty cases, however, the consular notification was not given.The International Court of Justice (ICJ) held that the U.S. was not in compliance with Art. 36 in the case of Avena and Other Mexican Nationals (Mex. v. U.S.), 2004 I.C.J. 12 (Mar. 31). The U.S. Supreme Court addressed the issue in the subsequent case of Medellin v. Texas, 128 S.Ct. 1346 (2008) in which it held that the ICJ decision in Avena was not directly enforceable as domestic law in state courts.

This thorny issue is still being debated. It may be up to the U.S. Congress to clarify.

There are no tools which systematically track the implementation of all treaties in the U.S. A search of the treaty name in PQ Legislative Insight should hopefully lead to the public law that implements that treaty. Alternatively, the following text is extremely useful both for finding ratification history and implementing legislation, if any. Wiktor, Christian L. Treaties submitted to the United States Senate: legislative  history, 1989-2004 (Martinus Nijhoff, 2006). KF4989 .W55 2006. 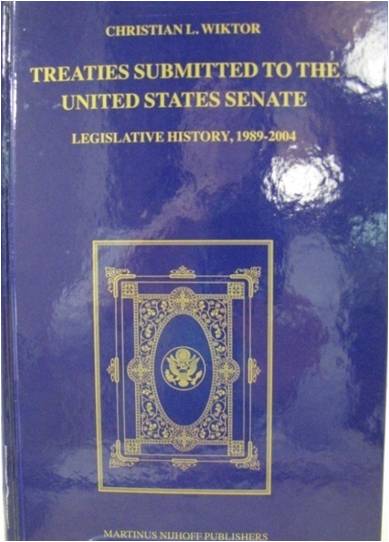