Why do Legislative History Research?

The major reason for doing legislative history research is to interpret a statute. Statutory language can often be vague or unclear. It can be difficult to determine how a statute applies to a particular situation. When a statute is relatively new, for example, there may not yet be other law, such as court decisions or agency rules, to explain the meaning of a statute.

What is Legislative History?

Legislative history refers to the documentation created during the legislative process. The legislative branch of the federal government, the U.S. Congress, is composed of two chambers, the House of Representatives and the Senate. As shown below, proposed legislation, which is called a “bill”, may be introduced in either chamber. The bill is then referred to a House or Senate Committee which analyzes and reports on it. The Committee also holds hearings at which experts testify about the issues the bill seeks to address. When the bill comes out of Committee, it may be debated on the full House or Senate floor. The House or Senate will then vote on the bill. The bill must pass both House and Senate in identical form before it can become law. If conflicting House and Senate versions of the bill are passed, a Conference Committee may be formed to reconcile these differences. Once the bill passes both chambers in identical form, it moves on to the President who may either sign it into law or veto it. 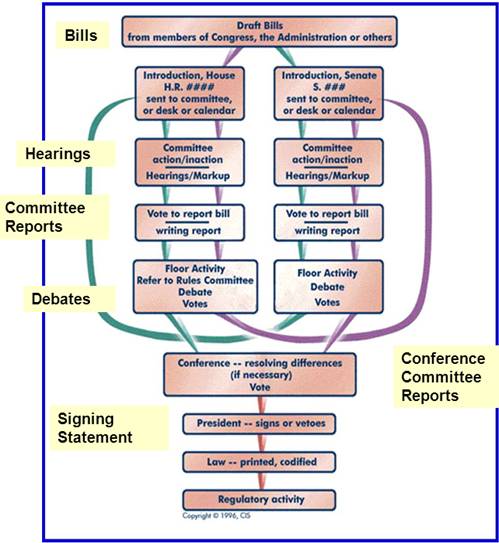 As a result of this process, various materials comprising the legislative history, are created. These materials include the text of the bill itself, different versions of the bill text at different stages, for example, the original, introduced version, the engrossed version as passed by one chamber and the enrolled or final version, amendments to the bill whether made or rejected, hearings, Committee and Conference Committee Reports, Floor Debates and Presidential messages after a bill’s passage. When researching legislative history, one, in essence, works backwards through the legislative process. The legislative process and resulting documentation is well described in The Process of Legal Research KF240 .P75 2008 which is in the Library’s Academic Success collection. Please refer to that text for further details.

Contact law-library@uic.edu with the subject you're researching and when you would like to meet. A librarian will get back to you to set up an appointment. You can also schedule an appointment on the library homepage by clicking "Schedule an Online Research Appointment." We ask that you request your appointment at least 2 days in advance, but remember that you can always stop by the reference desk for immediate help with a quick research question.